Another weekend gone and time for another read a book and review it moment. I wrote about my love-hate relationship with romance and chick-lit a while back. Despite my reluctance to reach for a girly book, I don’t want to shut the door completely. You never know where the next book that will change your point of view may be hiding.

Read a Book, Start With The First One

I read Me Before You when it came out and it caused a wide-spread tissue shortage in my little town (back when I lived in Slovenia). It was a book I fell in love with. Not just because of the emotions it stirred in me, but also because of the portrayal of the growing relationship between two unlikely people. And it made me think about the question of living and dying with dignity. When is the point in someone’s life when you say That’s it, I can’t go on like this anymore as this life has nothing else to offer. If you haven’t read it yet (or seen the film), go and do it now. 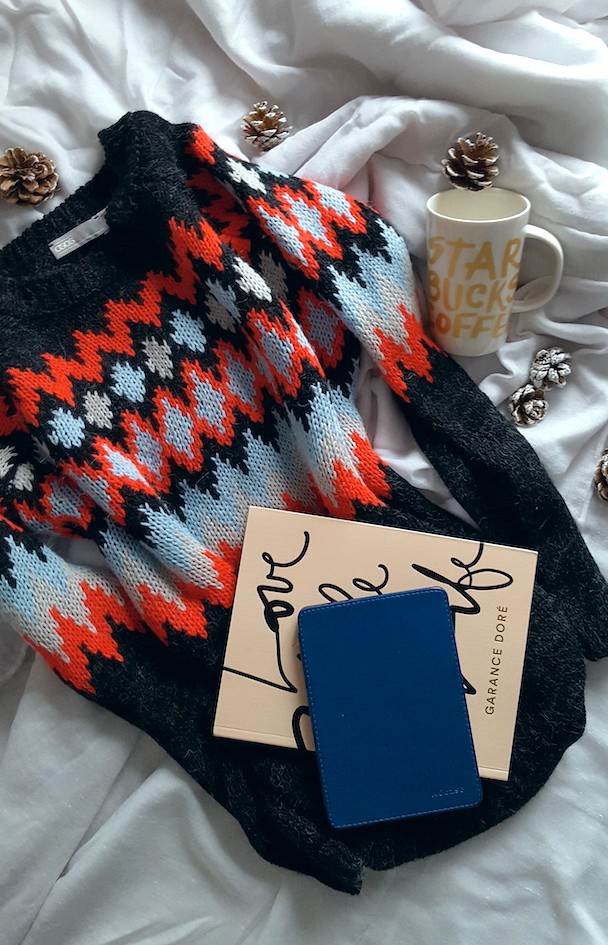 If You Read a Book and Love It, Do You Read the Sequel?

At the time when After You, the sequel came out, I was very much out of love with chick-lit. So I left this book at the bookstore. I didn’t feel like I wanted to read it or write a book review about it. If the first one was amazing, I was worried that the sequel will be a disappointment. 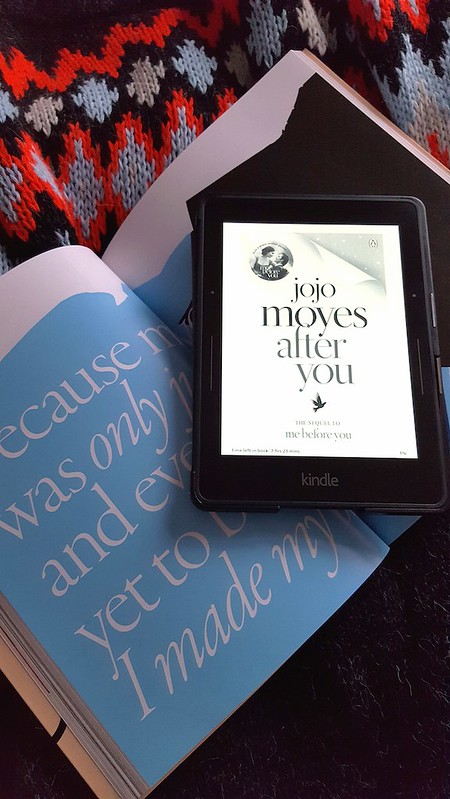 However, more than a year after its publication date, I finally downloaded it onto my Kindle

, grabbed the obligatory mug of coffee and my blanket and got all cozy. Reading is my escape. My downtime and I love to be comfortable. My read a book moment is my time to relax, forget about daily worries and enjoy the warmth and coziness of our flat. And After You wasn’t a terrible book to chill with.

Louisa now lives in London and it feels as if she’s stuck. At the end of Me Before You I felt her life was abut to take off. I thought Will’s given her wings. But in After You Lou isn’t spreading those wings. The way Jojo Moyes portrays grief or how it affects a person is ingenious. Rather than having Lou crying all the time, she has her merely existing and unable to move on. How do you build a life after the person you loved is gone forever? This is the questions Louisa can’t answer. 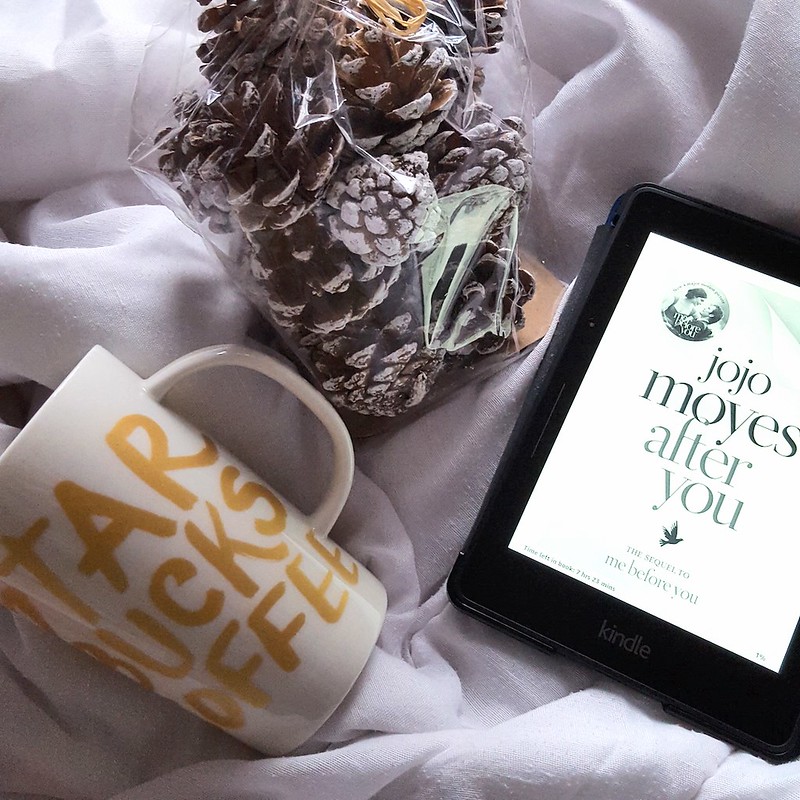 After a traumatic event and meeting a person from Will’s past, Louisa starts to learn to live again. And even how to fall in love one more time. It’s a bumpy road and her antics sometimes left me a tad exasperated, but all in all it’s an easy book to read. At least it didn’t make me want to smash my Kindle against a wall.

What I didn’t love about this book was that it felt forced. After the popularity of Me Before You, it was inevitable that a sequel would materialise at some point. What I missed was the banter and sparkling relationship between Will and Lou. There’s no such connection in book number 2. Lou feeling like she has to save the world was also a bit meh. The blast from the past is annoying to say the least. I found it hard to sympathize with a bratty, spoiled character whose biggest problem is that they have too much of everything. 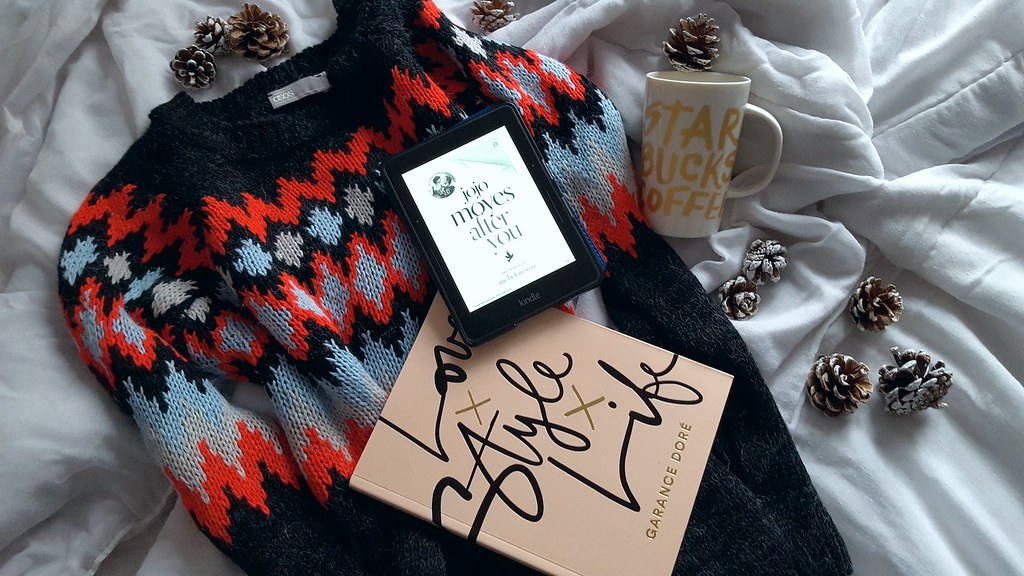 Lou’s new love interest also left me a bit cold. But maybe the lack of sparks signals what this relationship really is. A rebound one. The one after the life-changing one and before the everyday, forever one.

And the most annoying thing. Lou’s mum discovers feminism. Or the stereotypical feminism that’s totally cringe-worthy and doesn’t add anything to the story. Not shaving your legs isn’t some great feminism act. Whether you shave them or not it’s to do with personal grooming and what makes you feel comfortable (feminist or not). Personally, I’d rather reach for that Braun Silk-épil and feel more me.

If you want to read a book, this one isn’t too bad. It’s easy to read and it answers all of the what happened then questions. But as far as the plot is concerned, I’d probably give it a miss. Rather wait till they do the film and drag your boyfriend to see it as a revenge for making you sit through the new Star Wars.

Follow me on Bloglovin’ for more book reviews and other lifestyle posts. Or if you want to chat with me on Twitter, let’s connect.

Recharge Your Batteries or How I Claimed a Day to Myself

I've joined a few Twitter chats and engaged with other bloggers more recently. And I'm so glad that I've done...